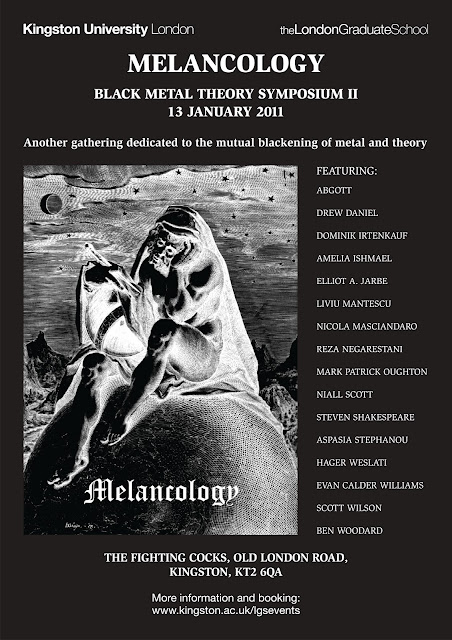 3.30
Steven Shakespeare, ‘A Machine for Breaking Gods: Unity, Nature and Ritual in US Black Metal’
Liviu Mantescu, ‘Suddenly, life lost new meaning: Melancology as another new age metaphor for transcendental encounters’
Dominik Irtenkauf, ‘To the Mountains or: rocking against melancholy. The implications of black metal's geophilosophy’

4.30
Elliot A. Jarbe, ‘Beyond Melancology: Hüzüncology and the Thymotic’
Hager Weslati, ‘Going to Hell in Northern Deserts’
Evan Calder Williams, ‘The hot wet breath of extinction’

MELANCOLOGY
‘Earthly thought embraces perishability (i.e. cosmic contingency) as its immanent core …. such perishability … grasps the openness of Earth towards the cosmic exteriority not in terms of concomitantly vitalistic / necrocratic correlations (as the Earth’s relationship with the Sun) but alternative ways of dying and loosening into the cosmic abyss … The only true terrestrial ecology is the one founded on the unilateral nature of cosmic contingency against which there is no chance of resistance – there are only opportunities for drawing schemes of complicity ... Hence, the Cartesian dilemma, “What course in life shall I follow?” should be bastardized as “Which way out shall I take?”’ -- Reza Negarestani, ‘Solar Infernal and the earthbound Abyss’
Black metal irrupts from a place already divested of nature, a site of extinction, ‘a place empty of life / Only dead trees …’ (Mayhem, ‘Funeral Fog’, 1992); ‘Our skies are forever black / Here is no signs of life at all’ (Deathspell Omega, ‘From Unknown Lands of Desolation’, 2005). As such black metal could be described as a negative form of environmental writing; the least Apollonian of genres, it is terrestrial – indeed subterranean and infernal – inhabiting a dead forest that is at once both mythic and real unfolding along an atheological horizon that marks the limit of absolute evil where there are no goods or resources to distribute and therefore no means of power and domination, a mastery of nothing.
A new word is required that conjoins ‘black’ and ‘ecology’: melancology, a word in which can be heard the melancholy affect appropriate to the conjunction. A new word implies a new concept and we know from Deleuze and Guattari that concepts have to fulfil three criteria. Accordingly, the plane of immanence of melancology is extinction and non-being. All things are destined for extinction; immanent to all being is the irreducible fact of its total negation without reserve or remainder. The development of the characteristics of melancology is to be addressed at the Symposium, of course, but there are already a number of apophasic determinations: it is not ecology, it is anorganic; it is not political economy, it is anti-instrumental; it is not love of nature, environmentalism, Gaia, geophilosophy … But it implies an ethos and a style that delineates the third aspect of the concept, its embodiment in a conceptual personae: the black metal kvltist whose ethos runs across the spectrum of melancholy from bile and rage to sorrow, depression and the delectation of evil all the better to affirm the desolation s/he contemplates in the sonorous audibility of black metal’s sovereign dissonance.
This environment of absolute evil is exactly the same as the absolute good of black metal itself: the expenditure of a sonic drive that propels a blackened self-consciousness, a melancological consciousness without object that is the necessary prior condition to any speculation on or intervention in the environment.
The Black Metal Theory Symposium thus invites speculation and interventions on the blackening of the earth, landscapes of extinction, starless aeon, sempiternal nightmares, black horizons, malign essences, Qliphothic forces from beyond … in a general re-conceptualization of black ecology.


Details and registration HERE.
at 5:57 AM