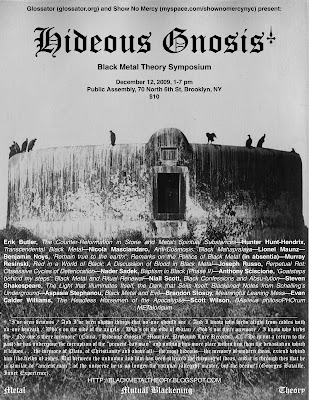 A gathering dedicated to the mutual blackening of metal and theory.

I: 1:00-2:15
The Light that Illuminates Itself, the Dark that Soils itself: Blackened Notes from Schelling’s Underground
Steven Shakespeare
The Counter-Reformation in Stone and Metal: Spiritual Substances
Erik Butler
BAsileus philosoPHOrum METaloricum
Scott Wilson
(moderator: Niall Scott)

Sponsored by Glossator and Show No Mercy
Organized by Nicola Masciandaro 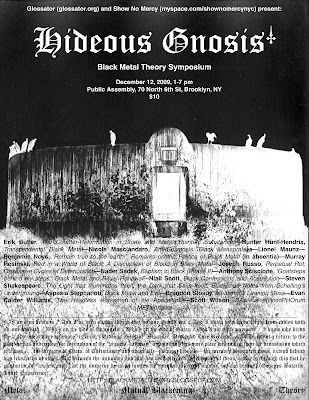 * * *
Why do you compel me to divulge things that would better remain unknown to you?--Silenus

What coherent representation could express or portray so gibbous and infamous a nebulosity as the specter of a malign, chaotic perversion, itself a morbid blasphemy against nature? Molded by the dead brain of a hybrid nightmare, would not such a vaporous terror constitute in all loathsome truth the exquisitely, the shriekingly unnamable?—H.P. Lovecraft, The Unnamable

He is not a return to the past; he has undergone the corruption of the “present-day man” and nothing has more place within him than the devastation which it leaves . . . the memory of Plato, of Christianity and above all—the most hideous—the memory of modern ideas, extend behind him like fields of ashes. But between the unknown and him has been silenced the chirping of ideas, and it is through this that he is similar to “ancient man”: of the universe he is no longer the rational (alleged) master, but the dream.—Georges Bataille, Inner Experience

But suddenly the Mirror went altogether dark, as dark as if a hole had opened in the world of sight, and Frodo looked into emptiness.—J.R.R. Tolkien, The Fellowship of the Ring

The black tablet of vision, I hold dear for the sake
That to the soul, it is a book of the picture of the dark mole of Thine. —Hafiz 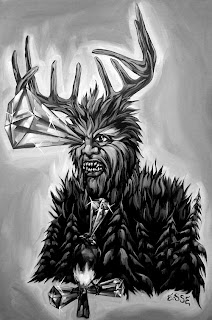